If the player cannot do any legal move despite the fact that his King is not in check it is called stalemate. and the game ends as a draw. As you see in the diagram: Black to move but he has no legal move.

Now you will see how the grandmasters used the stalemate as a trap and a combination.

Diagram A , Game Adams - Dimitrov : Adams (White ) prevented the defeat after Qh3+ ( check ) . Black must capture the Queen in order to not lose his queen.

Diagram B : The stalemate occured after Black Queen had captured the White queen: QxQ. White King has no move to do.

After the Queen and the Rook sacrifice of Black, the game ended in a draw because of stalemate.

White seems to be checkmated but he sacrifices his Rook and the Queen ( after pawn promotion) and prevents the defeat thanks to the stalmate. 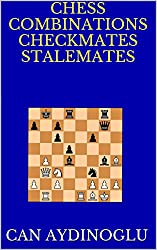 You can read this e-book related to stalemate combinations:
Chess combinations Checkmates Stalemates
: You can see the details on our chess books page.