It is possible to move the King and the Rook at once. The king moves two squares towards the rook and the rook is placed on other side of the king. 2 kinds of castling is possible: short castling and long castling .

Rules of the castling 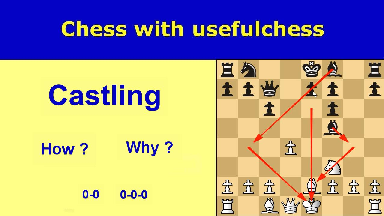 If a pawn advances two squares at its first move and comes next to the opponent's pawn , it may be captured by the opponent as it is pretended that it moved one square. It is called "en passant". But this capture must be made after the pawn moves two squares .

In the diagram Black pawn moved 2 squares and White captured it as it moved 1 square according to the "en passant" rule.

En passant : Now Black pawn is next to the White Pawn. White can use the "en passant" rule.

After en passant : White pawn captured the Black pawn as it moved 1 square according to the "en passant" rule.

Important note : If a player doesn't use this right and does another move , he will loose his "en passant right" and can not capture it again by using "en passant" right.